Join the Marin JCC and author Valerie Estelle Frankel for a deep dive into the intersecting histories of Jews, Science Fiction and Fantasy

Join us for part 1 in a two-part series: exploring how Jews, Jewish thinking, and the Torah have played an integral role in Sci-Fi and Comic Books.

Part one: Sci-Fi and Fantasy with Valerie Estelle Frankel

Did you know that Darth Vader’s breastplate is inscribed in Hebrew? Or that Spock’s world is based on Israel? With his famous salute coming from the Kohanim’s blessing? That Israel is the only country created from a fantasy novel? Or that Tolkien’s elves and dwarves speak Hebrew? That the comic book was a Jewish invention, and so was nearly every superhero? We’ll explore how Frankenstein, the first science fiction novel, is based in the legend of the golem. Likewise, Kafka’s cockroach story is a metaphor on Jewish alienation. Then we’ll move on through America: with Bugs Bunny, a few Muppets, and certainly Mel Brooks channeling Borscht Belt performers, with robot morality originating in Jewish philosophy, with Captain America and Superman punching out Hitler. We’ll explore the Jewish sensibility and creators behind Doctor Who, The Twilight Zone, and 2001: A Space Odyssey. And we’ll travel up to today, when an Orthodox superheroine pauses for Shabbat, a girl time travels with a magic tallit, and hot Jewish vampires take to the screen.

Valerie Estelle Frankel has won a Dream Realm Award, an Indie Excellence Award, and a USA Book News National Best Book Award for her Henry Potty parodies. She’s the author of over 80 books on pop culture, including Hunting for Meaning in The Mandalorian; Inside the Captain Marvel Film; and Who Tells Your Story? History, Pop Culture, and Hidden Meanings in the Musical Phenomenon Hamilton. Many of her books focus on women’s roles in fiction, from her heroine’s journey guides From Girl to Goddess and Buffy and the Heroine’s Journey to books like Superheroines and the Epic Journey and Women in Game of Thrones. Her Chelm for the Holidays (2019) was a PJ Library book, and now she’s the editor of Jewish Science Fiction and Fantasy, publishing an academic series that begins with Jewish Science Fiction and Fantasy through 1945. Once a lecturer at San Jose State University, she now teaches at Mission College and San Jose City College and speaks often at conferences. Come explore her research at www.vefrankel.com 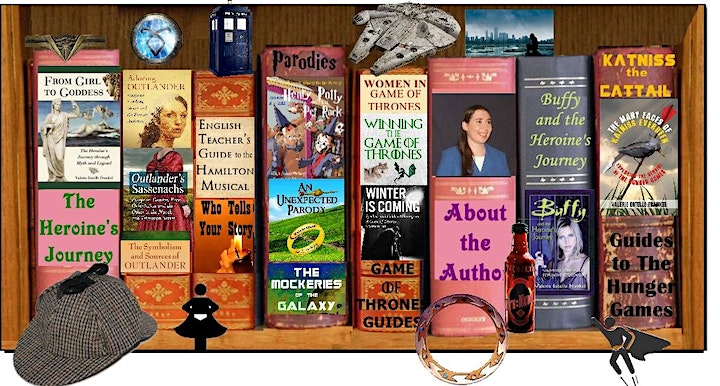